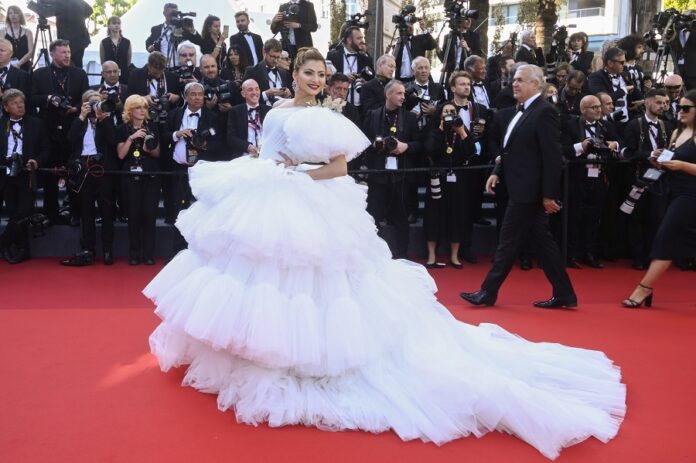 DUBAI: The 75th Cannes Film Festival rolled out the red carpet on Tuesday, attracting a wide spectrum of movie luminaries wearing their glittering best back to the French resort to celebrate the event.

Bollywood actress Urvashi Rautela was among the stars who championed a design from the region.

The Miss Universe 2015 contestant made her Cannes red-carpet debut at the premiere of “Final Cut,” floating in on a cloud of white tulle. The frothy confection was plucked from the atelier of Ward. The Indian 28-year-old looked every inch a Disney princess in the voluminous, asymmetrical gown with a long train. She paired the look with a braided updo and a bold red lip.

Ward also found a fan in American actress Liza Koshy, who stunned at the opening ceremony in a white sheer creation embroidered with pink, blue, and green sequins. The gown featured a single shoulder and a high slit, and she paired it with gold open-toe pumps.

The plunging gown featured a black ruffled cape with a long train. A cascade of embroidered crystals shimmered even more brightly against the flashing cameras.

It was the second time that Jain had opted for a gown from the Dubai-based womenswear brand. She said: “Wearing an Atelier Zuhra (dress) means stepping into a magical world made of opulent gowns worthy of a queen. When I saw this gorgeous dress in the showroom, its spell was cast on me.”

She paired it with diamond-studded jewelry signed Noor by Jahan.

Alice Abdelaziz stepped out in a lavish look by Zuhair Murad, which she paired with a ballooning taffeta cape. Getty Images

Abdelaziz made the case for an appealing contrast between voluminous shapes and slim silhouettes in a black sinuous number that was dripping in dark blue and silver sequins, which she paired with a ballooning taffeta cape thrown over it.