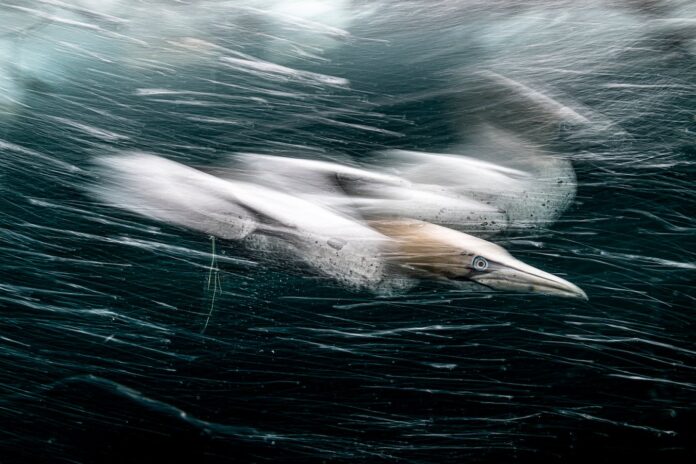 DUBAI: The winners of the 11th season of the Hamdan bin Mohammed bin Rashid Al-Maktoum International Photography Awards were announced earlier this month. The theme of this year’s awards was ‘Nature’ (intended to “draw the world’s attention to the seriousness of environmental issues and the need to unite efforts and enhance awareness of the importance of preserving our great home that we all share,” HIPA’s secretary general Ali bin Thalith said in a press release), but photographers could also enter the ‘General’ category (open to both black-and-white and color images), and the ‘Portfolio’ category, and the ‘Portrait’ category. Here, we present a selection of highlights from the winning entries.

The British photographer picked up the $120,000 grand prize for this stunning underwater shot of a gannet in the waters off the Shetland Islands — “a cold, harsh and wild place of which I have grown extremely fond,” he tells Arab News.

“Gannets are one of the most impressive animals I’ve ever come across, master of both air and sea. This photograph is captured underwater, surrounded by diving gannets, and I tried to display the controlled violence of the scene with a photograph which goes beyond what is seen by the naked eye. Dialing my shutter speed down, and moving my camera along with the movement of the seabirds, an artistic blurring occurred, eventually (after many attempts) leading to the frame we see here,” he continues.

Spiers’ photograph fits perfectly with the intentions of the prize, as stated by bin Thalith. Sadly, the gannets of the Shetlands are, Spiers explains, “in the midst of an avian flu pandemic which has ripped through their colonies. I recently returned from Shetland and bore witness to heart-wrenching scenes within the bird populations. One can only hope that nature will be sufficiently resilient to resist the damage caused by this disease.”

The Japanese photographer named his nighttime shot of Mollusca Gastropoda larvae “Jumeirah” because he felt it bore a resemblance to Dubai’s man-made island Palm Jumeirah. “It’s a cautious creature,” Minemizu said in his submission text. “If it feels the slightest splash of water, it will return to the oyster.” His shot was taken in the waters near Komi Island in Okinawa, Japan.

This image was shot in the Quang Ngai province of Cao’s homeland, Vietnam — located on the coast of the South China Sea. The fishermen’s boats, Vu explained, were “neatly lined up when anchored to avoid Typhoon Molave (in 2020), the most-powerful typhoon to hit Quang Ngai in 30 years, completely destroying 325 homes and damaging more than 140,000.” Vu is not a professional photographer, but works in health care and volunteers for a local charity in Quang Ngai, his hometown.

‘Relaxing in the rain’

The Qatari photographer’s captivating image of a mountain gorilla called Kibande was taken in Uganda. “In rainy weather, we encountered a family of 19 gorillas,” Saifaldeen explained in his submission. “Kibande was in an open area in the rain, and when she closed her eyes, (it was the perfect time to take) this photo of her relaxing in the rain.”

The Indonesian photographer describes his shot of a group of kids in Papua celebrating their graduation from school by throwing flour over each other as looking “like a funny war.” “Despite their poverty and the poor condition of their school, they create happy moments together,” he said in his submission text.

Nicklen is a Canadian biologist “fascinated by changing seasons and their effect on the wildlife populations at our planet’s extremes, where conditions can shift dramatically.” This shot was taken on the Fishing Branch River in Canada’s Yukon, where “dwindling resources force typically isolated, nomadic” animals such as this bear “into close proximity.” Nicklen said he hopes images like those in his portfolio “will help underscore the struggle of life in the wild and convince us to rethink actions that jeopardize the survival of our animal cousins. Our urgency in dealing with the existential threat of climate change will make all the difference for her future and those like her.”

‘How Did You Get There?’

Vijayan took this bewildering picture of an orangutan up a huge tree in Borneo “after a grueling trip by boat and foot in shallow waters teeming with crocodiles.” Orangutans, he explained, only look up when they’re climbing, “so there’s only one way to get a picture … to stay on top of it.” The hardest part, he said, “was keeping quiet while he looked at me.”

Kader’s portfolio focused on the architecture of Dubai. “Over the decades, Dubai has developed some of the most innovative modern architectural buildings across commercial, residential, and public sectors,” he wrote. “From the tallest building in the world, the Burj Khalifa, to the latest architectural brilliance at Expo 2020, the list is astounding. As an aspiring photographer, it is my vision to capture these iconic structures through my lens.”