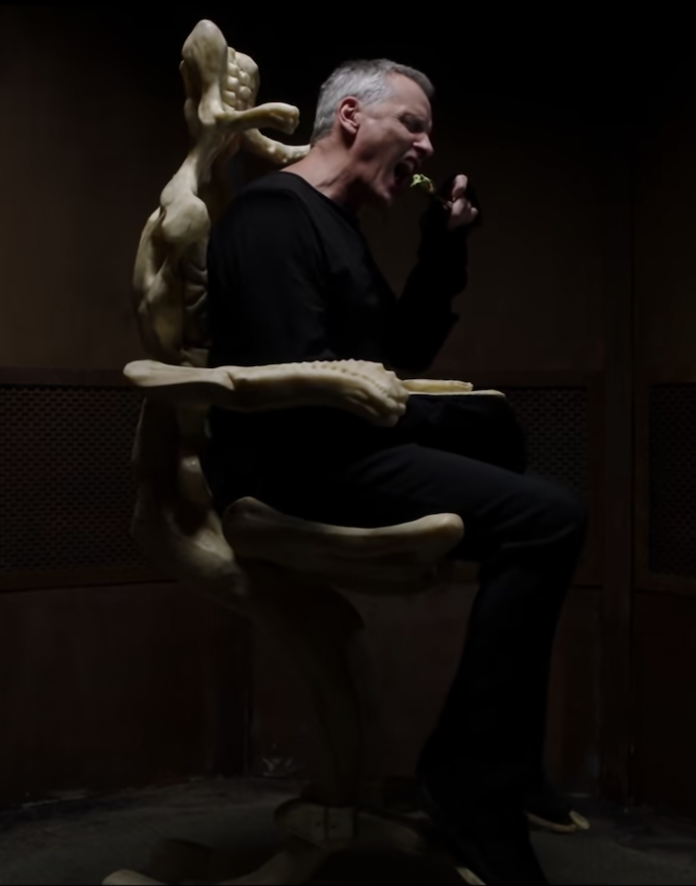 ‘Crimes of the Future’

It’s been more then 20 years since David Cronenberg played in the sandbox of body horror and science fiction. With “Crimes of the Future,” the legendary filmmaker behind gory classics such as “Scanners” (1981), “Videodrome” (1983) and “The Fly” (1986) firmly embraces his roots, reviving a story he has had in the back of his mind for years and never had the opportunity to tell — about a world in which surgery becomes a form of art. The filmmaker has reunited with one of his most fruitful partners, Viggo Mortensen, who plays the lead role. Mortensen was nominated for an Academy Award for Best Actor for the pair’s last collaboration, 2007’s “Eastern Promises.”

Iranian-Danish filmmaker Ali Abbasi, whose last film, 2018’s “Border,” won the Un Certain Regard award at Cannes, now finds himself competing for the festival’s biggest prize with a ‘pitch-black’ thriller, following a family man named Saeed who embarks on a dark quest to ‘cleanse’ the city of Mashhad of immorality — an endeavor that quickly turns deadly. As things progress, Saeed growing increasingly frustrated at the lack of public interest in his murderous mission, leading him to act out even further.

At this point, Belgian brothers Jean-Pierre and Luc Dardenne are Cannes royalty, having won six prizes at the festival for six different films. That impeccable track record makes their latest, “Tori and Lokita,” a favorite in this year’s competition, with the always socially conscious filmmakers this time turning their attention to two friends who have travelled from Africa to Belgium only to be faced with its cruel realities as they struggle to survive. The film continues their turn towards more race-focused themes, with their last prize-winning film, 2019’s “Young Ahmed,” following a Belgian-Arab boy who falls victim to radicalization.

Korean cinema has finally broken through to the mainstream. While Bong Joon-ho may be the one who successfully broke the Oscar barrier, it was Park Chan-wook who first caught the eye of the world, with his controversial 2003 film “Oldboy” becoming one of the most widely-seen cult classics of the century thus far. With “Decision to Leave,” the filmmaker returns to Cannes for the first time since 2016’s “The Handmaiden,” this time following a detective who falls in love with a mysterious widow after she becomes the prime suspect in his latest murder investigation.

Swedish-Egyptian filmmaker Tarik Saleh makes his Cannes debut with “Boy from Heaven,” a follow up to his Sundance Film Festival winner “The Nile Hilton Incident.” While his previous political thriller stirred up some controversy in Egypt (he had to transfer production out of the country after the backlash), “Boy From Heaven” proves he has not lost his taste for confrontation. It is a political thriller following a power struggle in the wake of a high-ranking religious leader’s suspicious death.

An aspiring writer and a small-time crook team up for a sinister scheme in “Mediterranean Fever,” Palestinian filmmaker Maha Haj’s return to Cannes after her debut, “Personal Affairs,” premiered in 2016. The film, set in Haifa, sees supporting actor from “Personal Affairs” —Amer Hlehl, who has been honing his craft with the UK’s Royal Shakespeare Company — promoted to his first big-screen leading role. He captures Haj’s trademark dark humor with an existential flare. While this is her second feature, Haj broke into film in the art department of Elia Sulaiman’s acclaimed films “The Time That Remains” and “It Must Be Heaven” before stepping behind the camera herself.

In one of Morocco’s oldest medinas, husband and wife Halim (Saleh Bakri) and Mina (Lubna Azabal) run a traditional caftan store in desperate need of help. The two hire a talented young man named Youssef — and quickly find that his presence is having a profound effect on their lives. With “The Blue Caftan,” Moroccan filmmaker Maryam Touzani, collaborator and wife of “Casablanca Beats” filmmaker Nabil Ayouch, returns to Cannes after her highly-acclaimed film “Adam” — itself about a modest bakery in Casablanca that takes in an unexpected guest — lit up the Un Certain Regard section of the festival in 2019.

There are few more interesting film careers than that of George Miller, the Australian filmmaker behind the “Mad Max” trilogy, “Babe,” and both “Happy Feet” films. Miller never received the respect he deserved until the release of 2015’s “Mad Max: Fury Road,” a deliriously masterful display of skills that garnered 10 Academy Award nominations that year. While we won’t see a follow up to that film until 2024’s “Furiosa,” Cannes will see the premiere of his latest epic, this time following a scholar (Tilda Swinton) who encounters a Djinn (Idris Elba) in Istanbul that offers her three wishes in exchange for freedom.

While it still feels the world has yet to take notice of director James Gray, the American has long been a favorite at Cannes. His previous films “We Own the Night” (2007), “The Immigrant” (2013) and the Brad Pitt science fiction epic “Ad Astra” (2016) all made their debuts on La Croisette. His latest is his most personal yet, based around his upbringing in Queens, New York and starring some of the best actors in the world, including a still-at-the-peak-of-his-powers Anthony Hopkins, Jeremy Strong (“Succession”), and Anne Hathaway.

If you’re a fan of scathing satire, there’s a good chance you’re also a fan — or should be — of Swedish filmmaker Ruben Östlund, whose previous two films, “Force Majeure” and “The Square,” were two of the most hilarious, not to mention deeply uncomfortable, films of the last decade. With “Triangle of Sadness,” the filmmaker has traded in the ski slopes of Sweden and the museums of Denmark for the sunny isles of Greece, filming his latest over 72 days on a deserted island during the pandemic. It tells the story of a pair of models who find themselves at a turning point in their respective careers.