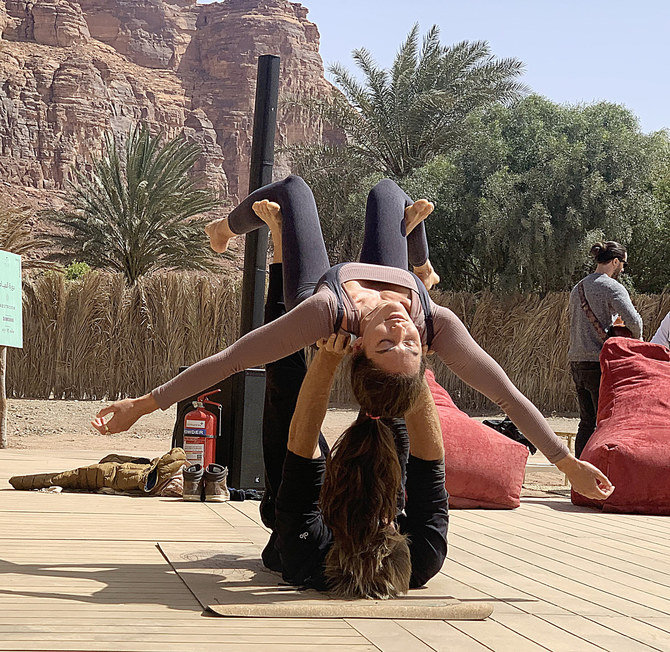 RIYADH: Collaborations in cinema and entertainment are expected to play a crucial role in the promising new era of cross-sector cooperation between Saudi Arabia and India as part of their strategic partnership.

Barely four years after the resumption of movie screening in the Kingdom, the movers and shakers of India’s multibillion-dollar Hindi film industry, better known as Bollywood, are being invited to seize the opportunities opening up in a fast-changing country that now aspires to be a world-class center for film.

The twin facts of India being a market with immense potential and the presence of a large Indian diaspora in the Kingdom make the nation of 1.38 billion people a natural partner for Saudi Arabia as it seeks to diversify its economy away from oil and into the creative industries, among other fields.

A deal between Saudi sporting authorities and India’s Ministry of Ayush aims to promote yoga education in the Kingdom. (Supplied)

“I see a huge potential for future collaboration on film production and other cultural sectors between India and Saudi Arabia,” Saudi Minister of Culture Prince Badr bin Abdullah bin Farhan wrote in an opinion piece for The Times of India newspaper on May 1, following a three-day visit.

“We have seen many synergies across the value chain of filmmaking, such as the co-production of family-oriented content, infrastructure development and nurturing local talent.”

Under Saudi Arabia’s Vision 2030 social and economic reform agenda, the government aims to increase household spending on cultural and entertainment activities inside the Kingdom from 2.9 percent to 6 percent.

To achieve this, the Kingdom has been allocating resources generously to the domestic film industry, as well as opening scores of new cinemas, concert venues, sports arenas and leisure facilities across the country.

Existing collaborations with Bollywood have already resulted in an increase in the distribution and exhibition of Indian films in Saudi Arabia.

“Kaala,” a film by the iconic Indian actor, producer and screenwriter Rajinikanth, became the first Indian film released in the Kingdom in 2018, while the acclaimed Bollywood film “83” premiered at the Red Sea International Film Festival in 2021.

The potential returns from an expanded partnership are huge. The global film and video market reached a value of nearly $234.9 billion in 2020, having increased at a compound annual growth rate of 2.4 percent since 2015.

“With the Indian film industry being one of the largest and most celebrated in the world, and as Saudi Arabia aims to become a world-class center for film with an anticipated contribution of $6.9 billion to the Kingdom’s GDP by 2030, there are numerous opportunities for the film industries of both nations,” Prince Badr said.

“From talent, through to production, distribution, and technical know-how across the value chain, there are plenty of areas for both countries to collaborate and create content that is suitable not just in their respective countries, but also for a global audience.”

As chairman of the Film Commission, Prince Badr led a Saudi delegation to India in April to discuss ways to expand cultural partnerships, particularly in the film industry.

The delegation included representatives from Film AlUla, a company established in early 2020 by the Royal Commission for AlUla with a mandate to promote filming in Saudi Arabia’s historic AlUla region and develop a film-friendly ecosystem to support productions.

“The Indian film sector is among the best known and most successful in the world and, during our recent visit, we were delighted to meet with many of the industry’s most celebrated individuals and entities,” Abdullah Al-Eyyaf Al-Qahtani, the Film Commission’s CEO, told Arab News.

“With our own film industry among the fastest growing in the Middle East and North Africa, we can learn much from Bollywood and introduce opportunities to key Indian productions and businesses in Saudi Arabia. We hope to continue to bolster ties with India as the Saudi film sector reaches new heights both at home and abroad.”

India and Saudi Arabia have enjoyed decades of strong economic and socio-cultural ties since formally establishing relations in 1947.

Existing collaborations with Bollywood have already resulted in an increase in the distribution and exhibition of Indian films in Saudi Arabia. (Supplied)

These ties were cemented during the 1950s when King Saud and Prime Minister Jawaharlal Nehru exchanged visits — a cordiality that has continued to this day with similar visits by Saudi Crown Prince Mohammed bin Salman and Indian Prime Minister Narendra Modi.

Commercial partnerships between the two nations have meanwhile grown apace. In the financial year of 2017-18 alone, Indo-Saudi bilateral trade was worth $27.48 billion — up from $25.1 billion in the preceding year, according to India’s Economic Times newspaper.

The agreements were reached at the Saudi-Indian Forum in New Delhi during Crown Prince Mohammed bin Salman’s 2019 visit to India, when he envisioned investment opportunities of more than $100 billion in India.

Significantly, the highlight of the final day of the Red Sea International Film Festival in Jeddah last December was the presence of a number of Bollywood celebrities, including Ranveer Singh and Deepika Padukone, who brought their full glamor to the world premiere of the film “83.”

In comments to Arab News, Singh said: “I’m really happy to be here. It’s my first time in Saudi Arabia. I’ve always been fascinated by Saudi Arabian culture, and I hope to get a taste of it tonight.”

“83” was released across the Gulf region on VOX cinemas on Dec. 23, a day before its worldwide release.

“I think the opening we Bollywood performers have got in Saudi Arabia is a great opportunity to showcase the talents of both these beautiful countries,” Abu Malik, a Mumbai-based Indian singer and music director, told Arab News.

The film industry is not the only area where the two nations have been keen to foster collaborations. Running in parallel to strategic investments has been a focus on bolstering cultural ties.

For instance, on June 21 last year, coinciding with International Day of Yoga, the Saudi Ministry of Sports’ Leaders Development Institute signed a memorandum of understanding with the Morarji Desai National Institute of Yoga, affiliated with India’s Ministry of Ayush, to promote yoga education in the Kingdom.

Acceptance of the physical and mental health benefits of yoga has been aided by the Kingdom’s burgeoning investments in sports and public health initiatives. (Supplied)

The agreement has paved the way for the establishment of formal yoga standards and courses in Saudi Arabia and collaborations in research, education and training.

Yoga, which originated in India, is a popular pursuit across the world. In Saudi Arabia, acceptance of the physical and mental health benefits of yoga has been aided by the Kingdom’s burgeoning investments in sports and public health initiatives.

De, who has written 22 books including “Bollywood Nights,” added: “Beyond Indian cinema, there is enormous potential for enriching the cultural landscape in deeply meaningful ways.”

For both Riyadh and New Delhi, the commemoration of 75 years of India’s independence is a valuable opportunity to reflect on past decades of strong economic and socio-cultural relations while also looking toward the future.

“India continues to be a market of high strategic relevance to Saudi Arabia, and we are seeing a sustained increase in opportunities for cooperation and knowledge-sharing among the two nations, as well as synergistic investments for mutual growth,” Prince Badr said in his Times of India op-ed.

“Through consistent and meaningful engagement with government entities, strategic partners, and wider participants in India, we look forward to bolstering this very promising sector as we together shape a shared future for our nations.”