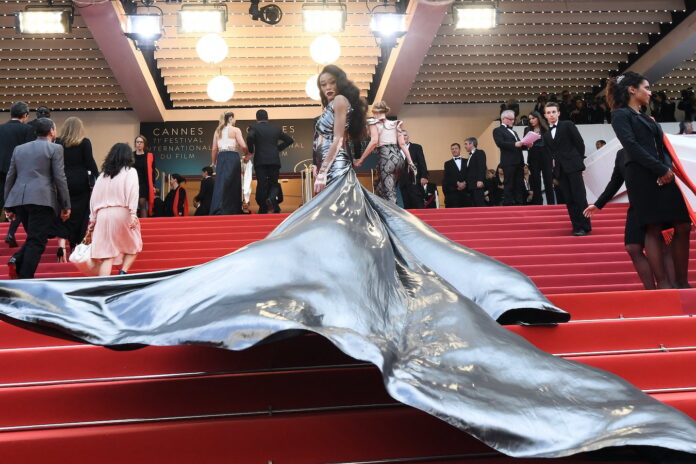 DUBAI: After a decade in the business, Lebanese couturier Jean-Louis Sabaji has dressed some of the biggest celebrities, including Beyonc? and Rita Ora. His headline-grabbing creations regularly grace red carpet events across the world. Who can forget Cardi B’s purple floor-length gown bursting with feathers at the shoulders she wore to the 2021 American Music Awards? Or Aishwarya Rai Bachchan’s iridescent foiled leather dress at Cannes in 2019.

Sabaji’s fascination with fashion was inherited from his late father Jean, also a designer. He grew up surrounded by beautiful dresses in his father’s atelier, from which he still works today.

“I was named Jean-Louis after the great Jean-Louis Scherrer, a very famous French designer — it was as if I was destined to be a designer from birth,” he says. “As a kid, I used to make miniature dresses for Barbie dolls. My dad encouraged me to keep doing this, unlike others who bullied me for dressing dolls.”

Sabaji completed his undergraduate degree in graphic design at the Lebanese American University and later attended the Domus Academy Milano for his master’s degree in fashion design. After completing his master’s with distinction, he came back to Lebanon and worked on his first collection in 2012.

Given that he already had access to an atelier with experienced seamstresses — as well as the fact that fashion had been such a large part of his upbringing — launching his own brand wasn’t too tough. But getting anyone to notice was a different matter.

“Lebanon has a lot of designers, so to stand out in a country with that much talent was hard. Additionally, I’m not very commercial. I target a niche clientele with my conceptual designs, so that made it more challenging,” he says.

He started by diving straight into the haute couture category. He didn’t get into ready-to-wear collections until much later. “I’d been taught that, in fashion, you work from top to bottom,” he explains.

Once his name was well established, both regionally and globally, he branched out into ready-to-wear, producing his first collection in 2021.

“During the pandemic, we understood the market better. We needed to have more clients, so that’s when we launched the ready-to-wear.”

Sabaji loves to push the boundaries when it comes to daring designs. In 2013, he created a gown that looked like it was engulfed in a cloud of smoke — an idea inspired by wildfires in Lebanon that wrecked some of the country’s rural areas. “I used silk organza and airbrushed it to mimic smoke and the effect that ink has when it’s mixed in water,” he says.

Complex garment construction and meticulous hand embroidery are the backbones of his creations. “It’s very important to me that a dress holds the woman’s body properly for her to feel confident. That’s when it comes down to pattern making, the construction and the corsets inside the dresses,” he explains.

Another of Sabaji’s signatures is the use of feathers, which appear in almost all of his collections, whether used sparingly on the sleeves or as an explosion covering the entire dress.

“Feathers are so feminine. The way they move on the body is very romantic,” he says. “Growing up, we had a house in the mountains with a huge garden with a lot of animals and birds. I was always inspired by these beautiful creatures.”

Sabaji is very particular about animal welfare, so the feathers he uses are all natural falls and are ethically sourced from specific farms, he stresses.

Gradually, his contemporary interpretation of classic couture fused with edgy elements and glamour sparked the interest of international stylists. In 2018, Mary J Blige chose a dramatic black-and-white Sabaji gown to wear to the SAG awards — his first major celebrity endorsement. Just months later, Beyonc? wore his ‘Sphinx Abaya’ mini-dress with train for a major gala in Los Angeles. At Cannes the following year, Aishwarya Rai Bachchan’s edgy fluorescent gown was all over the news. Crafted from 18 meters of stiff foiled leather that mimicked snakeskin, the dress took 200 hours to create and came with its own set of challenges.

“Initially, we had some issues with the fit because it was a stiff dress made out of leather, so it wasn’t easy to alter. Up to the last minute, we weren’t sure if she was going to walk the red carpet in the dress, but Aishwarya has a very good team, so, ultimately, they managed to sort it out,” Sabaji says.

2022 has been a remarkable year for the designer. Not only did he celebrate the tenth anniversary of his label’s creation and sign up for a major partnership (details of which are still under wraps — all he will say is that it’s “big”), but he was also the first Middle Eastern designer to collaborate with Mattel for a special Barbie collection which he presented at Arab Fashion Week in Dubai last month — a full-circle moment for the kid who was bullied for dressing up dolls.

“Everyone had a smile on their face watching the show. And for me, it was full of emotions. I had tears in my eyes the entire time backstage,” Sabaji says. “Barbie is a childhood memory, and seeing all this on the runway was so nostalgic.”