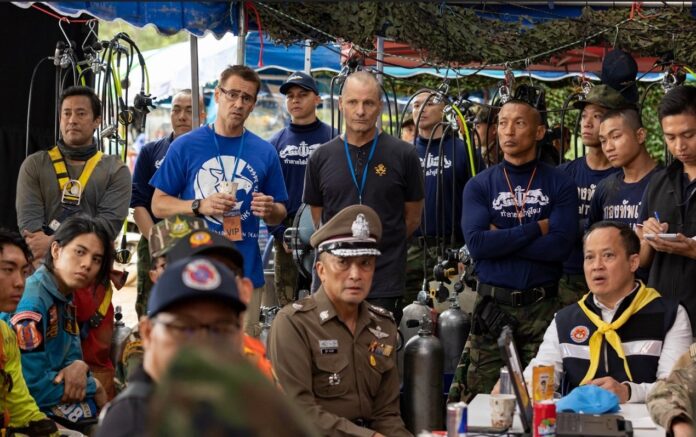 LONDON: When details began to emerge of the daring rescue of a Thai football team from flooded caves in Tham Luang Nang Non, it seemed only a matter of time before Hollywood swooped in to buff the real-life drama with the polish of a big-budget movie adaptation. Happily, “Thirteen Lives” is more than a shameless cash in. Director Ron Howard treads carefully, telling the story of a truly monumental international rescue effort which eventually expanded to include more than 10,000 people. Rather than attempting to only superficially capture that sense of scale, however, Howard focuses in on a few crucial players — the British dive team who first located the boys, the small group who planned and orchestrated the rescue of the 12 young players and their coach, the local governor tasked with bringing everybody home, the Thai engineer working with locals to divert the floodwaters, and the Thai Navy SEALs who spearheaded the initial response.

For the most part, this focused approach works well. Viggo Mortensen and Colin Farrell (questionable English accents aside) are excellent as divers Richard Stanton and John Volanthen, as are co-stars Joel Edgerton (as Australian Richard Harris) and Sahajak Boonthanakit as Governor Narongsak. Though the famous faces inevitably get the lion’s share of the screentime, Howard does his best to tell more than just the tale of the Western saviors – taking a few beats to flesh out characters such as the parents of the boys, local farmers and the frustrated SEALs.

In order to do so, Howard also had to be a little ruthless with his 150 minutes — so there is no mention of Elon Musk’s contentious contributions to the rescue effort, and no time to find out much about any of the innumerous supporting volunteers. Instead, “Thirteen Lives” is a tense, taut drama, claustrophobically shot and scored. It’s perhaps impossible to accurately recreate the sheer terror that must have gripped the rescuers and rescued alike, but Howard goes some way towards acknowledging their magnificence.