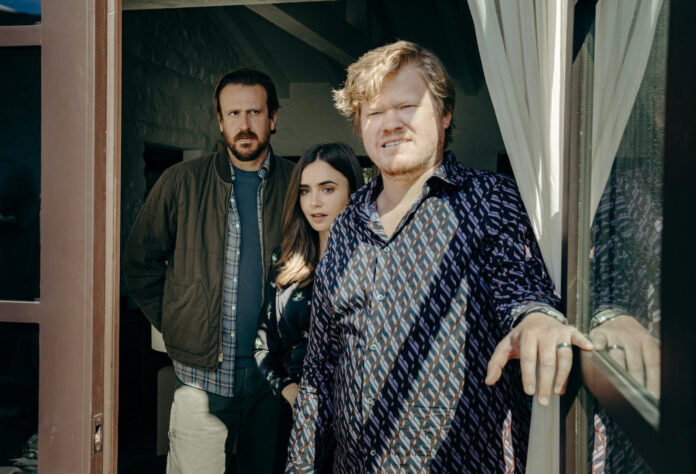 LONDON: Just in case audiences did not get the chance to read the official logline for “Windfall” — which describes it as a “Hitchcockian thriller” — the film’s director Charlie McDowell, director of the 2014 comedy-thriller “The One I Love,” lets everybody know what he is aiming for in the opening few seconds of his new movie, with lingering views of a sprawling, palatial home set to chunky, discordant music that telegraphs his intention to channel the famed British filmmaker.

Jason Segel’s character, Nobody, stalks the grounds of the beautiful property, searching for something and drinking his orange juice. He begins to wipe down anything he’s touched, and we realize that he is there to rob the place — only to have his plans upended by the unexpected arrival of its occupants, CEO, played by Jesse Plemons, and Wife, portrayed by McDowell’s real-world spouse, Lily Collins. After a tense, brief standoff, Nobody takes the couple hostage, bartering with them for a payout to leave them in peace.

McDowell — working from a screenplay by “Seven” and “Sleepy Hollow” writer Andrew Kevin Walker, and frequent collaborator Justin Lader — opts to sit on much of Nobody’s backstory. It is hinted that he may have fallen foul of the very innovation that made CEO his millions, or that he may have altruistic intentions at heart, but the director decides to leave much of this unsaid. A shame really, as the lack of character detail makes it hard for Segel, Plemons or Collins to convey much in the way of, well, character.

Instead, each must rely heavily on tropes and stereotypes to carve out any sense of identity in this dialog-heavy movie; Plemons plays the CEO as an entitled jerk, Collins the trophy wife with bigger ambitions, and Segel is the bedraggled stranger with wild eyes and a mysterious motivation. They all acquit themselves with skill, but none of the three seem likely to look back on “Windfall” as their magnum opus.

There is something to be said for leaving audiences to fill in the blanks, but this tense (yet unwieldy) movie needs to give viewers more to build on.