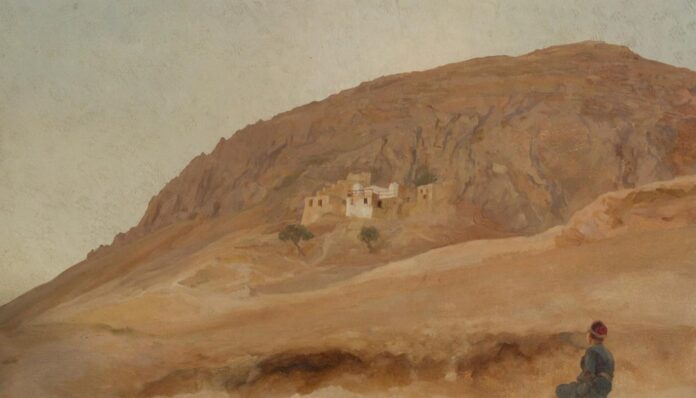 DUBAI: A long-lost Syrian landscape sketched by British artist Lord Frederic Leighton in 1873 will soon return to the walls of Leighton’s namesake museum in London.

Leighton drew the piece during a visit to Damascus, where he was reportedly impressed by the old town’s traditional houses. A frequent traveler, the architecture and design of the Arab world later inspired his own sumptuous ‘Arab Hall’ in his Kensington residence-cum-studio, where the Leighton House Museum now stands.

The subject of Leighton’s earthy-toned, oil sketch is the Maqam Al-Arba’in shrine atop the Syrian capital’s Mount Qasioun, home to the legendary Cave of Blood — supposedly the location of the first murder; Cain’s killing of his brother Abel.

Leighton stayed at the home of his friend, Syria-based diplomat Richard Burton, from which the mountain was accessible. The rare sketch hung in Leighton’s studio, accompanying a couple of other sketches of Syria and drawings from his journeys to Egypt, Spain, Italy, and Scotland.

“His landscape sketches weren’t really for exhibition. They were for his own interest and some sort of relaxation. He clearly really enjoyed the process,” Daniel Robbins, Leighton House Museum’s senior curator, told Arab News. “He was certainly interested in the effects of light and color as he traveled and used the sketches as a kind of reference when he was working on his own pictures.”

Acquiring this artwork is part of the museum’s ongoing mission of gradually restoring the house’s original content, which was sold by the renowned artist’s family after his death in 1896. According to cataloging work by Christie’s, more than 200 of Leighton’s sought-after landscapes were listed for sale, and later acquired by friends, peers, and private collectors.

“When this landscape came up, we were interested in it because it’s quite different — in terms of landscape and aspect — than the other two that we have,” said Robbins. “It’s an exciting thing to think of adding to the collection.”

The museum team was researching a future show on Leighton’s landscapes when the sketch came to their attention via a curator who cataloged it for a sale in Edinburgh. The public will be able to see the sketch when the museum, which is currently closed for renovations, reopens in the fall.