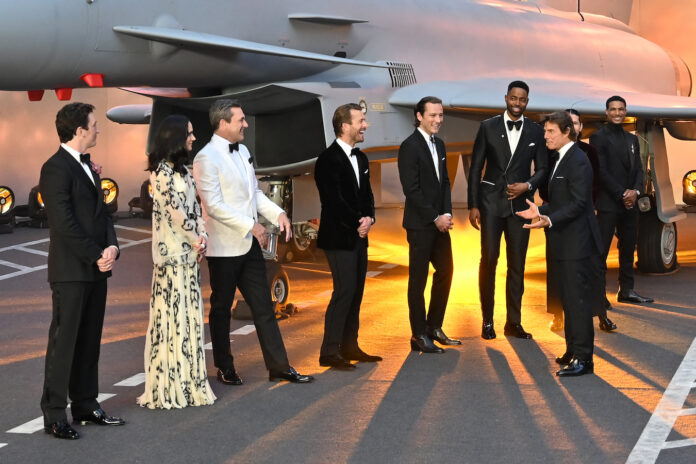 LOS ANGELES: “Top Gun: Maverick” takes audiences back to the danger zone with more high-flying action and the return of US actor Tom Cruise to his 1986 star-making role.

Similar to the pilots it showcases, critics are calling the movie the best of the best and an exceptional successor to the original.

In an interview with Arab News, American actor Jon Hamm, who joined the cast as Vice Admiral Beau “Cyclone” Simpson, said that the team working on the movie had “tremendous respect for the original and a real deep desire to make a second chapter of the story that’s just as compelling as the first.”

Hamm recalled watching the first film when he was 15 years old. “I remember immediately after seeing it, I wanted to see it again.”

Cruise and the cast of newcomers bring charm and emotion to the film particularly in the strained relationship between Maverick and Rooster, the son of his late best friend.

The actors in the movie credited Cruise’s well-established career saying that his 40-year experience helped them shoot the flick smoothly.

Actor Glen Powell, who stars as Lt. “Hangman” Seresin, said: “Tom Cruise put together our entire flight training program based on his experience on the first movie.

“So, the first movie they threw actors up there trying to get shots, but the problem is they’re vomiting and passing out and they’re just limp dolls in the back of a plane. So, you can’t use any of that footage.

“That’s only something Tom Cruise can ask for after a 40-year career of doing it at the highest level, so we get to look cool in the back of these F-18s,” Powell added.

Actor Miles Teller, who plays Lt. Bradley “Rooster” Bradshaw, said: “What an audience has been feeling for two hours, he can sum up in one look, and that is something that Tom really is a master of.

“He’s just been doing it at such a high level for such a long time and so I would just find myself sitting back and watching him,” Teller added.

“Top Gun: Maverick” premiered this week at the Cannes Film Festival, where Tom Cruise was lauded with a surprise Palme d’Or.

The movie will be released in Saudi Arabia on May 26.