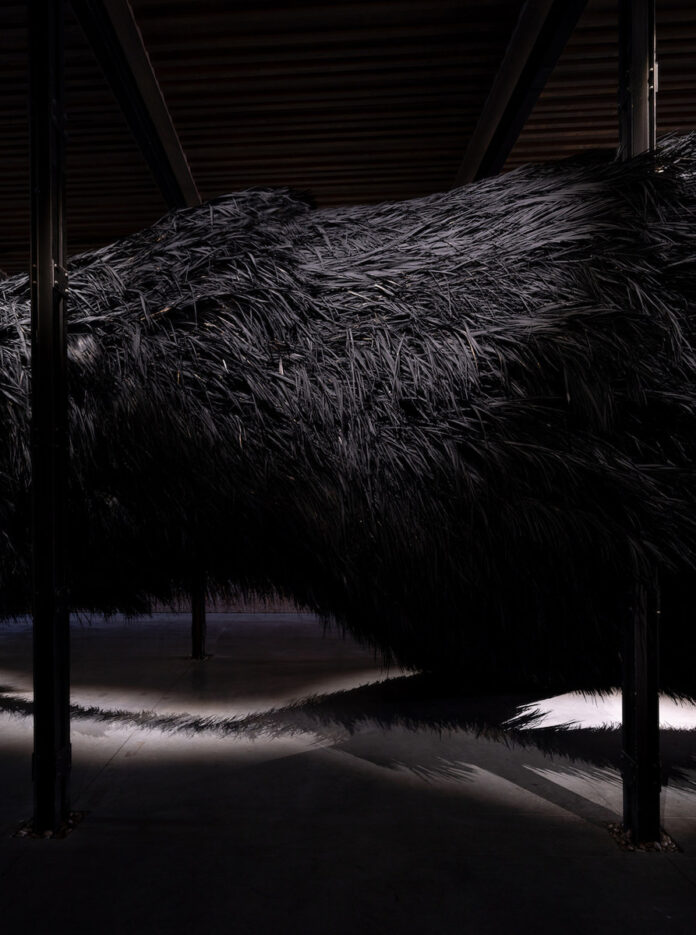 DUBAI: This year’s Venice Biennale features a strong showing of nations and artists from the Middle East.

In this 59th biennale, which runs until November 27, the Middle East region — including Iran, the Levant, the Gulf and North Africa — is represented through national pavilions, collateral events and individual artists.

Saudi Arabia’s pavilion, curated by Reem Fadda and Rotana Shaker hosts Saudi artist Muhannad Shono’s work “The Teaching Tree” — a huge installation that has been, according to an official statement, “carefully crafted combining natural elements and a mechanical structure, creating a visceral effect on the viewer.”

The piece references the drawn line as a fundamental visual necessity for any form of art or written word, and alludes to nature “as it writhes, fighting for its survival, shedding its skin, and ushering in hope for rebirth and new beginnings,” but also to the “wisdom contained in nature itself,” hence the title of the work.

For Shono, his appearance at the Venice Biennale is a huge honor, and a huge responsibility. “I don’t think of my showing as a personal achievement,” he told Arab News. “I’m carrying with me a brave and irrepressible creative spirit from across Saudi Arabia.”

The pavilion is also a reflection on the significant social changes that have taken place in the Kingdom and how these have channeled a new wave of creative outburst and critical dialogue. “The whole creative community in the Kingdom, not just in the visual or conceptual space, but in all kinds of creative expression, is being reborn,” Shono said.

The UAE Pavilion hosts “Between Sunrise and Sunset,” a solo show from Mohamed Ahmed Ibrahim, curated by Maya Allison, featuring work created specifically for the event by the Khor Fakkan-born artist.

“Between Sunrise and Sunset” at the UAE Pavilion by artist Mohamed Ahmed Ibrahim. Supplied

The show consists of a single installation featuring dozens of Ibrahim’s human-sized, organic sculptural forms — drawn from his deep connection to his hometown’s natural environment. The forms have an array of colors, ranging from bright hues to more-neutral, earthy tones, to black and white as they progress across the room.

“In Khor Fakkan, the sun makes a shadow, not a proper sunset,” Ibrahim told Arab News when he discussed “Between Sunrise and Sunset” back in February. “At the end of the day, the sun goes to the back of the mountains. When we were growing up, we didn’t see the sun set, because the mountains would hide it.”

Egypt’s pavilion, meanwhile, features an evocative, eye-catching installation called “Eden-Like Garden,” created by Mohamed Shoukry, Weaam El-Masry, and Ahmed El-Shaer. It resembles a series of cow’s udders hanging from the ceiling of a pink-walled room lined with black metal ‘fences.’ It alludes to fertility, sexuality, purpose, serenity, temptation and desire and is both “sacred and profane,” according to a statement. “In this installation … the human being is raptured in an eternal war between instinctive and volitional nature.”

Oman has its first-ever pavilion at the Venice Biennale this year. Curated by Aisha Stoby, an art historian specializing in creations from Oman and the Arab world, the pavilion presents a retrospective of sorts on the country’s contemporary scene, which has been little regarded until now by Arab historians.

Oman’s first-ever pavilion at the Biennale presents a retrospective on the country’s contemporary scene. Supplied

For the group exhibition, “Destined Imaginaries,” Stoby includes five artists: Pioneering Omani painter Anwar Sonya; Hassan Meer, founder of The Circle, a platform for experimental art in the sultanate; Budoor Al-Riyami, an installation artist and photographer who won the Grand Prize at the 13th Asian Art Biennale in 2008; Radhika Khimji, known for her feminist work that incorporates sculpture, collage and textile; and the late sound and installation artist Raiya Al-Rawahi who died of cancer in 2017, aged 30.

“Although we are showing three generations of Omani artists, it is a presentation showcasing different perspective(s) of how we might ourselves (be viewed) from a future perspective in terms of ecology, society and art,” Stoby told Arab News.

She explained how Oman has a “thriving local ecosystem” for arts and culture bolstered by institutions and state-funded initiatives. “This presentation in Venice has long been anticipated and we hope it will be the first of several,” she added.

Lebanon’s appearance at the biennale is a clear sign of the country’s determination to preserve and showcase its cultural identity through art, despite the severe economic, social and political challenges it currently faces.

The Lebanon pavilion has installations by Ayman Baalbaki and Danielle Arbid. Supplied

Funded by private Lebanese donors with support from the Lebanese Ministry of Culture and curated by Nada Ghandour, the pavilion presents an installation from Beirut-based artists Ayman Baalbaki and a video by Paris-based filmmaker Danielle Arbid.

The work on show offers a dialogue, says the curator, between the Lebanese living in the country and those abroad.  Baalbaki, known for his expressionistic canvases featuring bursts of rich impasto in vibrant palettes often tells of the emotional impact of conflicts in the Arab world, particularly in Lebanon. Abid’s work, on the other hand, draws her inspiration from her cross-cultural upbringing living in France, Lebanon and the West.

“We wanted to participate this year to say to the world that Lebanon still exists on an international level, especially through its art and culture,” Ghandour told Arab News. “We are showing another face of Lebanon, not only the country’s problems, but the art and culture that we have.”