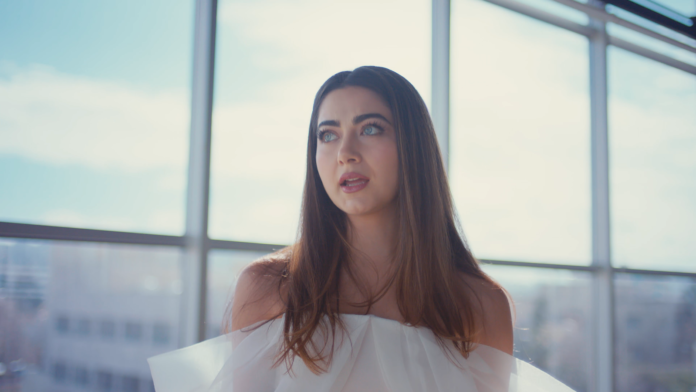 DUBAI: If you’re looking to add something fresh to your playlist, Palestinian-Jordanian singer Dana Salah’s fusion of Arabic, Latin and Western music could be just the thing.

Streaming service Spotify announced last month that pop-indie artist Salah, formerly known as King Deco, is the second ambassador for EQUAL Arabia, an endeavor that aims to amplify the work of women creators by giving them international recognition.

As part of Spotify’s campaign, the Amman-based artist, who lived in the US for seven years, was featured on a billboard in the heart of New York’s Times Square.

Salah is the second ambassador for EQUAL Arabia. (Supplied)

The singer told Arab News that seeing her picture there was a “pinch me” moment.

“It’s amazing that it was there because I was doing something I believe in — music that’s true to who I am and my heritage,” she said.

“To see myself on arguably one of the biggest stages in the world and having accomplished this by making music in Arabic and expressing myself through my culture is an incredible feeling. I didn’t have to compromise who I am or where I come from to be there.”

Salah, who started her career by writing music and DJ-ing, said that she received a lot of support from her community. “It was so heartfelt seeing so many people post about this achievement and celebrate it as a win for the Jordanian artistic community,” she said.

And the campaign seems to be working, with Salah explaining that her audience is already expanding across the globe.

She recalled a comment she read online from a new listener who said: “I am from Indonesia and I found you from Spotify and I like your voice.”

“It meant the world,” Salah said.

Salah believes music is universal and she hopes that her music not only introduces audiences to Arab culture, but also brings other cultures together.

“It’s what I did with ‘Weino.’ I mixed traditional Arabic instrumentation with a Latin-type backbeat and Western song structures. I think there’s something very beautiful about mixing genres,” she said.

“I’m obsessed with taking two contrasting elements and making them coexist in the same space. I live for it when it comes to art but also on a day-to-day — put me on a dinner table with the most diverse group of people and I’m happy,” she said.

Her early influences were also varied, with her mother and aunt introducing her to an array of musical films before she could even speak.

“They’d always put on ‘The Sound of Music’ and I would get so excited because I just wanted to hear the songs, especially the ‘Yodel’ song, and I would hum to it,” she told Arab News. “It wasn’t until I was maybe four to five years old that I discovered my love for singing watching ‘The Little Mermaid.'”

As for her current playlist, the artist said: “I love Stevie Nicks and Max Martin as songwriters. I adore Lana Del Ray and Kanye West when it comes to aesthetic and creating worlds and visuals around their music. I love the instrumentation of Warda and Umm Kulthum’s songs,” she said.

Most central to Salah’s identity as an Arab woman is her unwavering appreciation for the timelessness of Arabic artistry, from finding inspiration from Algerian singer Warda to using strings, tablas (twin hand drums) and riqs (the Middle Eastern tambourin) from veteran Egyptian singer Umm Kulthum’s “Alf Layla w Layla.”

Her visuals are just as important to her as an artist. She pays homage to the Arab world by using its landscapes, architecture, cultural elements and fashion to reignite a love for Arabic heritage in her videos and cover art.