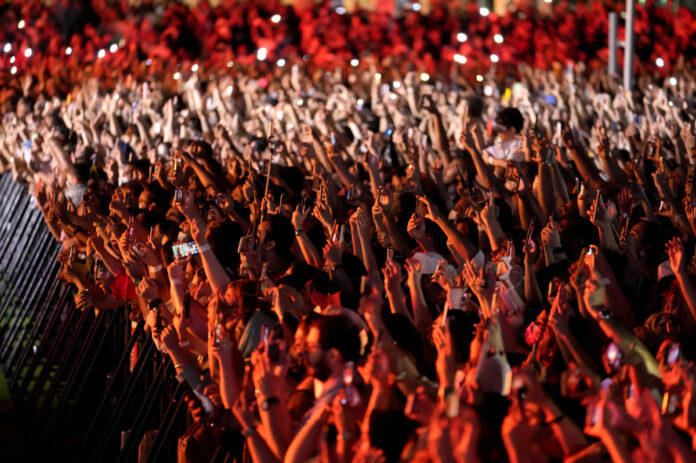 DUBAI: It was music fit for the troubled times.
Her voice full of heartache and tender resolve, Iranian pop diva and national icon Googoosh delivered old hits and songs from her new album to a packed stadium on Thursday in Dubai — just across the Arabian Gulf from her home that had banned her from singing for 21 years and where authorities to this day continue to protest her performances.
“When our lives pass away in dismal loneliness, where will we find these beautiful moments again?” she crooned in Farsi from the stage at Expo 2020, Dubai’s world’s fair. “Let my dreams not be forever unfulfilled.”
Dressed at first in a simple white dress and later changing into a shimmering black gown, she swayed her hips gently and said she hoped people would remember the night forever.
The audience went wild.
Googoosh’s classic pre-1979 Islamic Revolution songs drew cheers and shouts of recognition, as Iranian concert-goers sang every word of the cabaret-style ballads and jump-danced to her discotheque tunes.
“I can’t tell you how much I love her,” gushed 35-year-old Sarah Ali, an Iranian fan who traveled from Oman for the concert and arrived at Expo nine hours early to get as close as possible to the stage. “My country has so many problems, the economy is terrible, the government is, you know, there are no freedoms. But we have our legend.”
The life of 71-year-old Googoosh, born in Tehran as Faegheh Atashin, has echoed Iran’s times of turmoil before and after the Islamic Revolution.

Under the Western-backed shah Mohammad Reza Pahlavi, Googoosh rocketed to fame in the 1960s and 1970s as a Tehran cabaret star. But the revolution that ousted the shah and installed a Shiite theocracy later silenced her — the clerics banned pop music and female performances.
When Iran’s reformist government granted her permission to travel in 2000, she left home to find millions of fervent fans around the world awaiting her return to the stage — those in exile who remembered the heyday and those in Iran eager to hear her through bootleg music cassettes.
Her new album, “Twenty One” came out a year ago, and her current tour will take her from Los Angeles to Toronto. The electrified Dubai audience on Thursday signaled the passing decades have in no way diminished her popularity.
“She’s just amazing,” said 13-year-old Aida Mohammadi, an Iranian who lives in Dubai. “My mother and I both grew up dancing to Googoosh every single day.”
The thousands of waving and swaying Iranians in attendance — many of them expatriates for whom Googoosh has long been a powerful if not painful invocation of their past lives in Iran — also testified to the deep relationship between Dubai and Iran.
The United Arab Emirates, with its glimmering financial hub, its hedonistic hotels and bikini beaches just 100 miles (160 kilometers) from the Islamic Republic, has for decades been home to hundreds of thousands of Iranians. A strong community of Iranian businesspeople built booming enterprises here after 1979 and as Dubai became a key transshipment point for Iran for goods and supplies.
But that relationship has come under strain. The UAE, with its assertive foreign policy run from Abu Dhabi, became an enthusiastic backer of former President Donald Trump’s maximum pressure campaign on Iran. Trump’s crushing sanctions and decision to withdraw from Tehran’s still-tattered nuclear deal with world powers heightened hostilities across the Gulf waters.
Political tensions bubbled to the surface when Expo announced Googoosh would perform here as part of her 2021-2022 tour. The pavilions of most of the 192 countries exhibiting at world’s fair are mainly government-funded and Iran reportedly had hoped Expo would showcase entertainment from present-day Iran.
Instead, Expo chose to feature Googoosh, an enduring cultural metaphor of shah-era Iran.
The Roudaki Foundation, a prominent Iranian state-run cultural institution, sent a letter of protest to Expo’s organizing committee. The letter, circulated widely in Iranian media, insulted Googoosh as Pahlavi’s “mistress” and decried Expo’s decision to elevate her as an Iranian “cultural symbol.”
Expo did not immediately respond to a request for comment about the letter.
Other Iranian critics of Googoosh’s concert abound, with many Islamic hard-liners still incensed over her 2014 music video that is considered taboo in Iran.
But those detractors were nowhere to be seen in Dubai as the final notes of “Kavir,” or “Desert,” drifted through the sprawling fairgrounds. The audience chanted her name and shouted, “I love you!” as confetti rained down.
From a mood of wistful loss, the song swelled into defiant and triumphant last notes.
“I just hope to see this one day in Iran,” said Ali, gesturing toward the vast crowd of older couples and young girls, some in Islamic black chadors and others in spaghetti straps, singing at the top of their lungs.