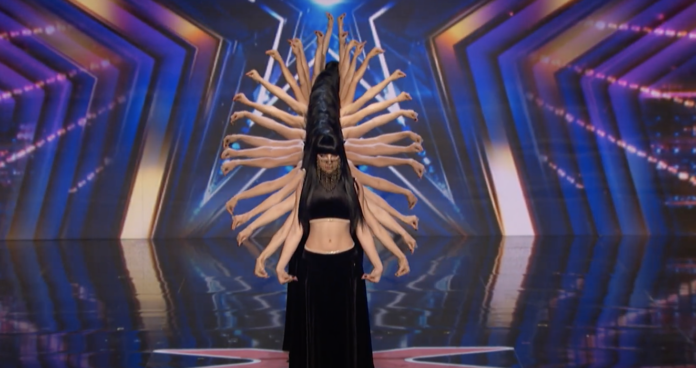 DUBAI: Lebanese dance group Mayyas on Tuesday got the Golden Buzzer from Colombian actress and judge Sofia Vergara in season 17 of “America’s Got Talent.”

Mayyas — that according to the crew translates in Arabic to mean, the proud walk of a lioness — stepped out on stage wearing Arabian-inspired dancewear with beaded burqas.

In the short documentary before the group’s performance, its Lebanese choreographer Nadim Cherfan said: “Seeing the Mayyas in ‘America’s Got Talent’ is the most beautiful feeling I have ever felt.”

And before starting their show, one group member told the jury: “Unfortunately, being a female Arab dancer is not fully supported yet. Us being here, standing on the biggest stage of the world, is our only chance to prove to the world what Arab women can do; that we can create, the fights we fight.”

Dancing with synchronized moves to Arabic beats, the group’s show-stopping routine earned a lengthy standing ovation from the judges.

Panel member Simon Cowell said: “That was arguably the best dance act we have ever seen.”

And Vergara said: “There are no words to explain to you what we’re feeling over here. It was the most beautiful creative dancing I’ve ever seen.”

German-American model Heidi Klum told the dancers: “I want to thank you for giving us a little glimpse of your culture, which is so beautiful.”

Before pressing the buzzer, Vergara added: “I would be so honored to empower you even more in this journey because you deserved it and I want to be part of this.”

By getting the Golden Buzzer, the crew will move straight to the live shows.

In 2019, the group won the “Arabs Got Talent” competition and wowed TV audiences on “Britain’s Got Talent.”