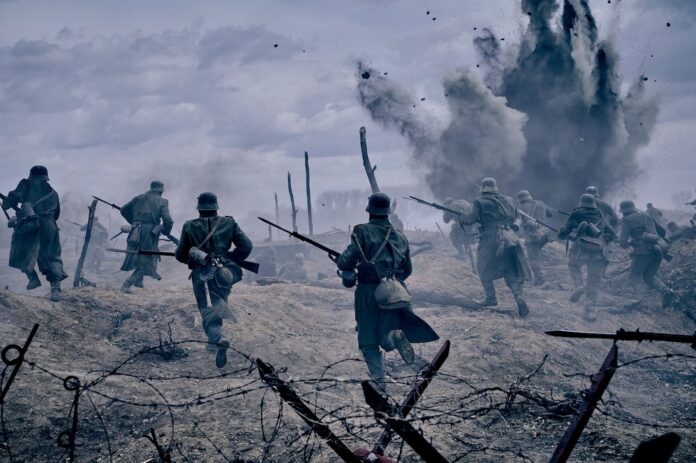 DUBAI: There are numerous war films that, rather than glorifying fighting, grittily depict its misery and horror (Sam Mendes’ “1917” is perhaps the finest recent example), but few have done so in such a poetically brutal and memorable way as Netflix’s new German-language movie “All Quiet on the Western Front.”

Based on Erich Maria Remarque’s classic anti-war novel from 1929, it tells the story of the final 18 months or so of World War I through the eyes of the young German soldier Paul Baumer (newcomer Felix Kammerer in a career-making performance), who enlists with three school friends in Spring 1917, full of patriotic verve and dreaming of glory.

“All Quiet on the Western Front” is a German-language movie. (Supplied)

Those dreams are shattered within hours of their arrival at the Western Front, which, by this point — three years into the war — is a labyrinth of fortified trenches and barbed wire in a blasted wasteland, in which millions have died without either side gaining more than a few hundred meters at a time. The na?ve young men who just joined up are, as the film jumps forward to the war’s final weeks, transformed by the senseless, numbing horror that confronts them (if they survive that long).

Paul and his friends are fortunate to meet “Kat” Katczinsky, a cynical older soldier who takes them under his wing, becoming a father figure and an aspirational role model for them. The relationship between Kat and Paul is the film’s emotional core, providing the humanity, humor and camaraderie that make the visceral battle scenes hit all the harder.

“All Quiet on the Western Front” is based on Erich Maria Remarque’s classic anti-war novel from 1929. (Supplied)

Director and co-writer Edward Berger spares the viewer nothing: Bodies are blown apart, the mud sucks weary legs down and makes the men easier targets as the bodies pile up, the hand-to-hand combat is claustrophobic and terrifying, often accompanied not by dialogue, but just the heavy breathing and desperate grunting of exhausted men trying to stay alive.

There are familiar tropes — the arrogant, pampered generals sending a few hundred thousand more men to die for the sake of their fragile egos; the recognition between foot soldiers of their shared humanity; and the awful futility of it all, for example. But since the source material invented many of these tropes, it makes sense that they are here. And they bear repeating.

Visually, this is a stunning movie — full of beautifully framed images that will haunt you, particularly in the breathtaking first 15 minutes. Emotionally, it’s a harrowing gut punch. Death is foreshadowed and inescapable. There is no glory here. But the film itself is a triumph.