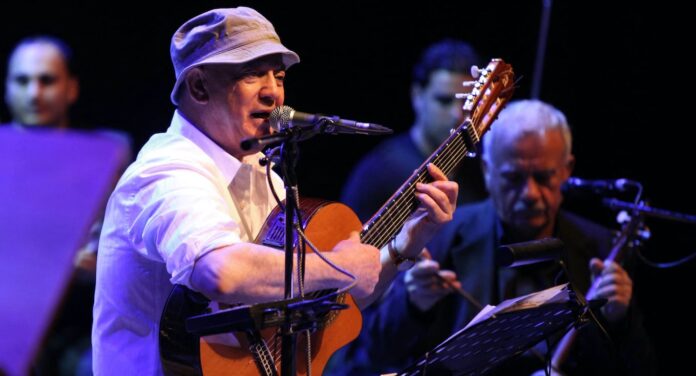 DUBAI: As one of the first musicians from the Middle East to marry Western instrumentation with Arabic music and poetry, Iraqi singer-songwriter Ilham Al-Madfai has been dubbed “The Baghdad Beatle.”

“When we talk about Ilham, we’re talking about a school of music. He created his own path and style of music. Without Ilham Madfai’s music, most of the old Arabic songs would have disappeared,” says the singer’s son (and manager) Mohamad, in an interview with Arab News.

“What Ilham Madfai did during the Sixties — the revolution he created when he recreated those old Arabic songs on guitar — it made the old music popular for the young generation and helped them be proud of their culture and music.”

Born in 1942 in Baghdad, Al-Madfai formed what was reportedly Iraq’s first rock and roll band, Twisters, when he was just 19. Although almost universally shunned by music purists and critics, Iraq’s younger generation were, it turned out, ready to embrace this new style.

“In Arabic, the instrumental intros are endless and the melodies sad,” Al-Madfai told AFP in an interview in March 2021. “Me, I shortened the opening and chose the instrument which adds an upbeat rhythm and stays in the listener’s ear.”

The lyrics of most of Al-Madfai’s songs, apart from those he writes himself, come from ancient poetry and Iraqi folk music. “I interpret them by mixing in musical influences that I’ve discovered,” he explained. “All I’ve done is reinvent old Iraqi songs so that they can survive the passage of time.”

Madfai in the ruins of the Amman Citadel in the Jordanian capital on March 6, 2021. (AFP)

Al-Madfai moved to London to study architecture as a young man, following in the footsteps of his siblings. He soon became a regular at Bayt Al-Baghdadi, better known as Caf? Baghdad — a hangout frequented by many notable UK musicians of the time, including Beatles’ co-founder Paul McCartney, jazz star Georgie Fame, and Scottish folk singer Donovan.

“At that time, the youth of Iraq were fans only of Western music,” Mohamad says. “And then Ilham came along, and people began getting into this vibe of having Arabic songs played on guitar, and they started dancing to the songs. And that’s why the world called him The Baghdad Beatle — because he presented Arab music in a different way. And his contribution to the world of Arabic music is so immense, because today we have millions of musicians that are influenced by Ilham — and not only when it comes to playing guitar, but even by the style of performance,” said Mohamad to Arab News.

When Al-Madfai returned to Baghdad from London in 1967, he began combining flamenco guitar rhythms with Iraqi folk songs, and his popularity continued to rise throughout the Seventies. However, his fame — and his musical ventures — were halted by the rise and later rule of Saddam Hussein. Unwilling to join the Ba’ath Party, Al-Madfai left his home and went on to work in a number of different Middle Eastern countries as an engineer. It would be years before he broke his musical silence again.

When he returned to his country in 1990, the first Gulf War began soon after. And while Al-Madfai was greatly admired by Saddam and his family, he spurned their friendship at every opportunity, at great personal risk turn. After four years of trying to leave his country again, Ilham was allowed to go to Jordan in 1994 and make a home for himself and his family in Amman, where he still lives.

“We’ve all left our country for a variety of reasons. It’s true that I live in Jordan but I remain an Iraqi — attached in every way to my native land,” Al-Madfai, who also holds Jordanian citizenship, said in his AFP interview.

Al-Madfai’s talents are not limited to music, according to his son.

“When I was a kid, he raised me on sports,” Mohamad says. “Loving sports, loving football, loving music… He knows everything. And when I say everything, I mean everything. He has a great background in architecture, engineering, science, politics, sports, and, of course, music and art. He paints and he designs, he did the interior design for our house in Amman and our houses in London and Abu Dhabi.

“I’m very lucky to have a talented dad like him. Even until this moment, he is a school to me. Every single day, I learn something new from him, from his experience in this world, and for sure, from a great musician,” he continues.

At heart, Al-Madfai is a performer. From Glastonbury Festival to London’s Royal Albert Hall to the COP27 event in Egypt last week, he has always been a tireless entertainer, never missing a chance to perform for his legion of fans.

Mohamad recalls a concert attended by none other than the UK’s new king, Charles III (who was then a prince): “Charles said to (my father), ‘You reminded me of the great old days of Baghdad and Iraq, which I used to love to visit. And you remind me of the trees of Baghdad. Your style is amazing, and you’re the best ambassador for Arab music.'”