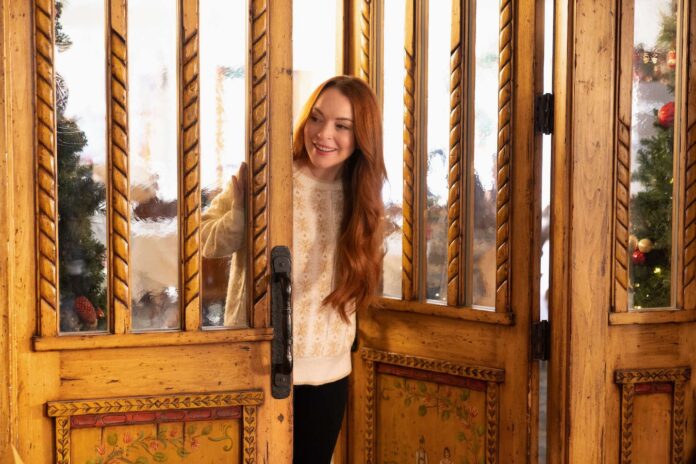 LONDON: Heralded as the jumping-off point for the triumphant return of Lindsay Lohan, “Falling for Christmas” is the first of two Netflix projects for the former teen star as she seeks to shrug off her bad-girl image and undertake a series of more wholesome movies — the second, “Irish Wish,” is a fantasy rom-com due in 2023.

As you may have guessed, “Falling for Christmas” is part of this year’s early-holidays fare from the streaming giant, and sees Lohan play Sierra Belmont, an entitled hotel heiress who hits her head during a skiing accident (the movie sees Lohan swapping the indoor slopes of Dubai, the emirate she now calls home, for the rolling mountains of Utah) and loses her memory. She’s taken in by lodge owner Jake Russell (“Glee” alumni Chord Overstreet) and his spirited daughter and, slowly, over the course of a few days, learns that money and status might not be as attractive as her previous life had led her to believe.

“Falling for Christmas” is part of this year’s early-holidays fare from the streaming giant. (Supplied)

And, to be fair to Lohan, she seems game for sending up her own reputation, at least a little. She sneers melodramatically as Sierra, before softening as “Sarah” — the amnesiac who learns to love Christmas all over again. Sure, it’s a little problematic quite how sweeping the generalizations are about blue-collar workers and their lifestyles, and Overstreet’s handsome widower feels a little convenient for the storyline, but you know what? As Christmas movies go, this is far from the worst. Whether or not it’s the start of Lohan’s grand return, however, remains to be seen.