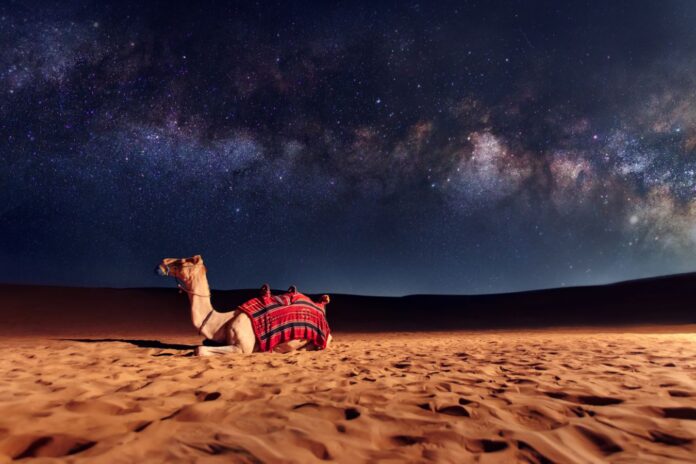 DHAHRAN: A Saudi travel exhibition opened in August to mark the Islamic new year has been encapsulated in a new book that will be released in December.

In 240 pages, “Hijrah: In the Footsteps of the Prophet” documents the historic journey of the Prophet Muhammad from Makkah to Madinah 1,400 years ago.

The exhibition, the contents of which the book has been based on, will run at the King Abdulaziz Center for World Culture (Ithra) in Dhahran until spring next year.

Dr. Idries Trevathan, a scholar of Islamic studies and curator of the Ithra display, also played a key role in curating and editing the book.

He was also assisted by experts in trying to piece together the narrative using geography, storytelling, and landscapes along with high-resolution images of the actual route.

Writing in the book’s forward, Ithra director, Abdullah Al-Rashid, said: “We humbly believe that this volume and this exhibition represent real steps forward and knowledge, scholarship, and understanding among all peoples and faiths.

“It is our hope that as we learn more about the Hijrah, we will be encouraged to emulate the values and practice of those who traveled and that this will lead to greater understanding, empathy, and tolerance.

“We trust that our efforts will give rise to still more research and insights as future scholars build on this work and use it to learn more.”

Other forwards were written by Farah Abushullaih, the head of Ithra’s museum, Anas Saleh Serafi, secretary-general of Dar Al Funoon Al-Islamiyya, and Laila Al-Faddagh, director of the National Museum of Saudi Arabia.

Trevathan told Arab News: “Hijrah translates as migration, and refers to the Prophet’s migration, together with his closest companion, Abu Bakr, from Makkah to Madinah in the year 622, which is exactly 1,400 years ago.

“The Hijrah event is important for Muslims around the world; it marks the passage of time, the beginning of the Islamic calendar.

“It’s very significant in the sense that it’s a foundational story for 1 billion Muslims around the world. It literally defines the identity of these people from as far apart as Morocco, all the way to Indonesia.

“When we looked at the Hijrah story, we realized that there’s never been an exhibition or a film made about it, this very, very important event. And so, just under four years ago, we thought, well, Ithra, we decided to remedy the situation and we created an exhibition on the Hijrah. And the exhibition today is the fruits of our labor.

“It’s been a real labor of love, it involves scholars, artists, people, individuals, and institutions from all around the world. It’s really been a collective endeavor. And we’re really proud and honored to be able to share it with the public.

“In conjunction with this exhibition, we also produced an exhibition catalog. And what’s unique about this kind of catalog, is that it has chapters by many guest authors, many very well-respected scholars from around the world, including Dr. Abdullah Alkadi, who is considered the authority on the Hijrah and one of the most important living biographers of the Prophet Muhammad today.

“We also have a chapter by Sheikh Hamza Yusuf from Berkeley, California. And we also have chapters by Ithra scholars,” he said.

“What’s unique about this book, and different from other books published on the Hijrah, is its focus on the landscape of the Hijrah, of the sacred landscape.

“We worked with many filmmakers and photographers to document the landscape. A lot of what they shot is included in this book, so incredible landscape photography.

“Also, we wanted to look at ways in which people creatively expressed the Hijrah story across the generations. So, we looked at the artistic heritage and the literature from the Islamic world and we included a lot of these pieces in this book, and in the exhibition.

“But we also wanted to understand how the current generations expressed their memories or their feelings about the story. We commissioned new artworks to be included in the exhibition — some of those are also included in this book,” he added.

One of the replica pieces featured in the exhibition recently went viral on social media.

Trevathan said: “As part of the exhibition, we commissioned a facsimile of the Prophet’s sandals to be made, because we wanted to show the footwear the Prophet was wearing during his journey. These sandals are based on early written sources and there are a lot of them which describe every last detail of what they looked like.

“The reaction to seeing the sandals has been incredible. I think people reacted so positively because they’re able to connect with the Prophet in a very special way through his possessions.

“So they’re able to relate to the story even more — in a closer way,” he added.

The book is now available for pre-order in English, with an identical Arabic version too and is on sale for $70 at the Ithra store and all major online retailers.