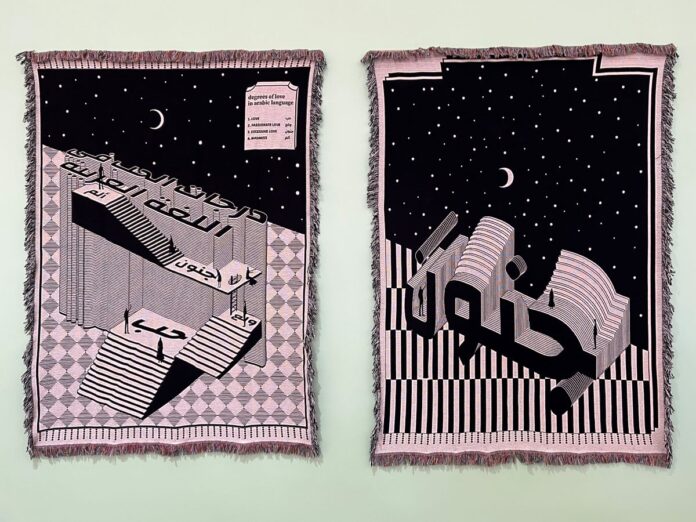 DUBAI: For this year’s edition of Dubai Design Week, Syrian designer and graphic artist Zena Adhami designed a pair of hanging rugs inspired by the various stages and types of romantic love.

Toned in cold black and white, the rugs also demonstrate the unique richness of the Arabic language, which has more than 50 words describing various degrees and kinds of love, including wala’a (passionate love) and junoon (excessive love) and alam (madness).

It took Adhami around three weeks to complete her rugs. (Supplied)

Adhami named her work “Degrees of Love in Arabic Language,” and told Arab News that it was an infographic depicting the stages of love that sparked the idea for the piece.

“I wanted to think about those tensions of the word ‘love,’ the complexity of the Arabic language and the form of Arabic letters,” explained Adhami.

The rugs partly portray the sense of getting lost in a space, but also one’s own world of inner emotions, under a starry night. (Supplied)

It took Adhami around three weeks to complete her rugs (with the help of a weaver). She began by using computer-generated imaging to help her create the various ‘steps’ (based on the words themselves) through which the figures in her design are climbing.

“It is quite challenging, because you’re translating something that is digital and you’re bringing it to life using a different material,” she said. “I let the material kind of dictate the meaning of the work. Errors might happen, but that is part of the interesting aspect of design.”

The resulting product partly portrays the sense of getting lost in a space, but also one’s own world of inner emotions, under a starry night.

“It is black-and-white only because love is mainly expressed at night. You can hear it in our songs in Arabic,” said Adhami.

Explaining the solitary nature of the figures in the rug’s designs she said: “It’s not necessarily about being isolated, but being connected with your feelings when you’re alone.”