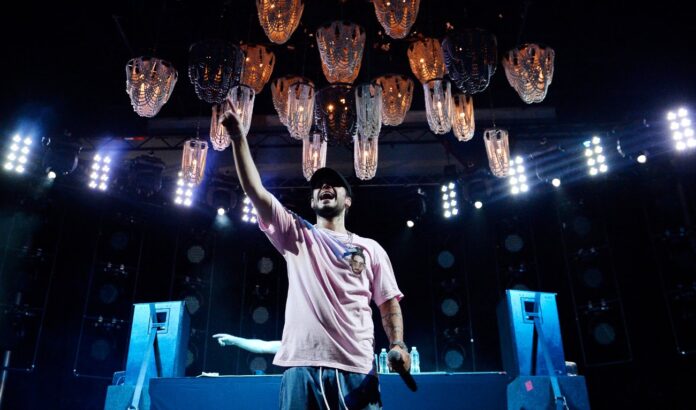 Commonly known simply as Russ, the 29-year-old American rapper, singer, songwriter and author, who first performed in the Kingdom in 2019, lists other American rappers and the classic rock he listened to as a youngster among his inspirations.

One of the most popular rappers in the world, he achieved 10 billion streams on Spotify and Apple Music without the backing of a major label, has performed sellout global tours, and was listed in Forbes magazine’s 30 under 30 list in 2019.

Russ emerged during the 2010s from the Atlanta-area underground music scene, releasing dozens of independent singles and albums, all of which he made freely available to download. His mainstream breakthrough came in 2017 with the platinum-certified top 10 album “There’s Really a Wolf,” before he cracked the top five of the Billboard 200 with “Zoo” in 2018 and “Shake the Snow Globe” in 2020, followed by the release of companion albums “Chomp” and “Chomp 2.”

Most recently, he collaborated with Ed Sheeran for new single “Are You Entertained,” on which Russ switches between singing and rapping.

The heavyweight title rematch between Usyk and Joshua is considered one of the biggest in the history of the sport. When they met in September 2021 at the Tottenham Hotspur Stadium in London, Usyk dominated the contest, earning a unanimous decision victory and three world heavyweight titles to become unified Heavyweight World Champion.