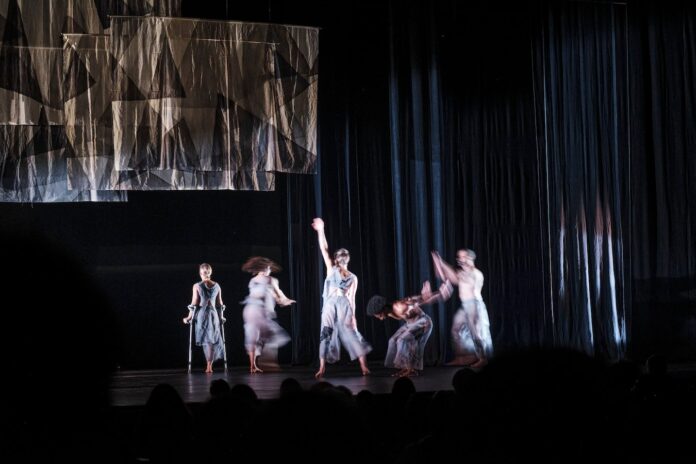 DUBAI: This week, performers from the British dance company Candoco took to the stage at The Arts Center of NYU Abu Dhabi with the support of luxury French jewelry brand Van Cleef & Arpels.

Featuring both abled and disabled dancers, the performances for the UAE premiers of “Set and Reset/Reset” and “Last Shelter,” choreographed by Trisha Brown and Jeanine Durning, transcended perceptions of what dance can be.

“Candoco’s work expands the vocabulary of contemporary dance for performers with different ways of moving, including the integration of people of determination,” Executive Artistic Director at The Arts Center at NYUAD Bill Bragin told Arab News. “Introducing UAE audiences to Candoco and their work builds on conversations around dance and disability that began in The Arts Center’s first season with Aakash Odedra Company.”

Van Cleef & Arpels has been a devotee of dance since its establishment in 1895. (Photography by Waleed Shah)

The performance was the first in a series presented for the first time with the support of Dance Reflections by Van Cleef & Arpels, a program launched by the high jewelry house during the fall of 2020 to strengthen its commitment to the arts with a special focus on dance.

Van Cleef & Arpels has been a devotee of dance since its establishment in 1895. Those familiar with the French jewelry brand will recall its enrapturing bejeweled brooches of ballerinas inspired by some of the leading dancers of the 20th century, including New York City Ballet principal Suzanne Farrell and Russian Anna Pavlova. Claude and Pierre Arpels were friends of George Balanchine, the Russian-born American ballet choreographer who was one of the last century’s most influential dancers. When Balanchine’s 1967 ballet “Jewels” premiered in New York City, some reporters at the time said that Claude Arpels suggested the idea of a ballet inspired by jewels to Balanchine.

The brand’s patronage of dance since the fall of 2020 has focused predominantly on a modern and contemporary choreographic repertoire, encouraging new dance productions by companies around the world.

The dances featured both abled and disabled dancers. (Photography by Waleed Shah)

At the helm of Dance Reflections is Van Cleef & Arpels’ Director of Dance and Culture Serge Laurent, who previously worked at the Centre Pompidou and the Fondation Cartier. He studied at the ?cole du Louvre in Paris.

“The first idea was to continue writing the story of the maison and its strong connection with dance as a source of inspiration,” Laurent told Arab News. “We are a company that is anchored in tradition but also very interested in new forms.”

The luxury brand’s support of and investment in dance was also a way to give back to the art form and to communities around the world.

The performances were choreographed by Trisha Brown and Jeanine Durning. (Photography by Waleed Shah)

“Dance brings all the artistic disciplines together: It can incorporate music, the plastic arts, costume, lighting, set design, graphic design and even jewelry,” Laurent said in a statement. “It is a fascinating art form and an incredible field of expression. That is why it can appeal to such a wide audience. I’d like to encourage spectators to admire the works freely, with no preconceptions.”

Van Cleef & Arpels’ new patronage of dance in the UAE comes at a time when the region’s dance scene is rising but still in great need of support — something that Bragin and The Arts Center at NYUAD are actively championing.

“The Arts Center has aimed to build an audience for contemporary dance in the UAE, giving exposure to world-class companies, providing training for local artists, and opening the doors for larger conversations through the art form of dance,” said Bragin. “The new partnership with Dance Reflection by Van Cleef & Arpels is especially meaningful since it recognizes the singular role The Arts Center has played in growing the dance ecosystem in the country through presentation, commissioning, transmission, and education. Van Cleef & Arpels have a century-long history of supporting the art form and being inspired by it. The combination of our visions together seems so organic.”